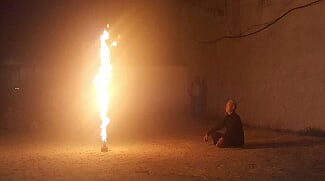 “City. The Inspiration”- original workshops led by Zbigniew Olkiewicz – actor and member of the Akademia Ruchu (Warsaw, Poland) since 1974.

The workshops is structured in various stages of creative work – from active observation of everyday life to work on the artistic recreation of selected elements of reality. Participants will use various artistic languages, seeking multidisciplinary forms, based on: motion, space and social message. They will learn about methods of operation in various spaces – both theater and non-theater – including street performance.

This workshop is aimed at actors, performers, musicians, dancers and artists in general who want to improve their skills in the field of artistic creation. During the sessions they will use various forms and languages of artistic expression and creative processes from the theatre and performative activities involved in social issues. The workshop will result in the artistic presentation. Creative assistant: Jarosław Siejkowski

Workshop session plan: • Presentation of selected actions and performances by Akademia Ruchu, inspired by daily reality. • The observation of everyday life and citizen reality in various aspects and selection of events, images, scraps of conversation, slogans and titles that can inspire further action. • Joint analysis of the observed “motives from the City” and an attempt to find a form for presentation for them. • Preparation and implementation of the most interesting motives to the performance.

From November 16 to 19. Hybrid location. Poland (via zoom) and Gori (venue to be confirmed by email) Time: Georgia: From 5:00 p.m. to 8:00 p.m (GMT+4/Georgia time) Registration via email: contact@artwithoutborder.pl (limited number of direct participants)

ZBIGNIEW OLKIEWICZ –actor, visual artist, actor and co-creator of most of performances and projects carried out by the legendary artistic group Akademia Ruchu – one of the most interesting theater phenomena independent theater in Poland. From 1974 he participated in numerous theater tours, projects and festivals in Europe, Asia and both Americas. He actively participates in the preparation and implementation of many international theater projects, artistic workshops and performance projects around the world. It operates on the border of theater, visual arts, performance and interactive installations.

Financed from the funds of the Ministry of Culture and National Heritage, within the scope of the Multiannual Program INDEPENDENT 2017-2022, as part of the “Cultural bridges” subsidy program of the Adam Mickiewicz Institute.